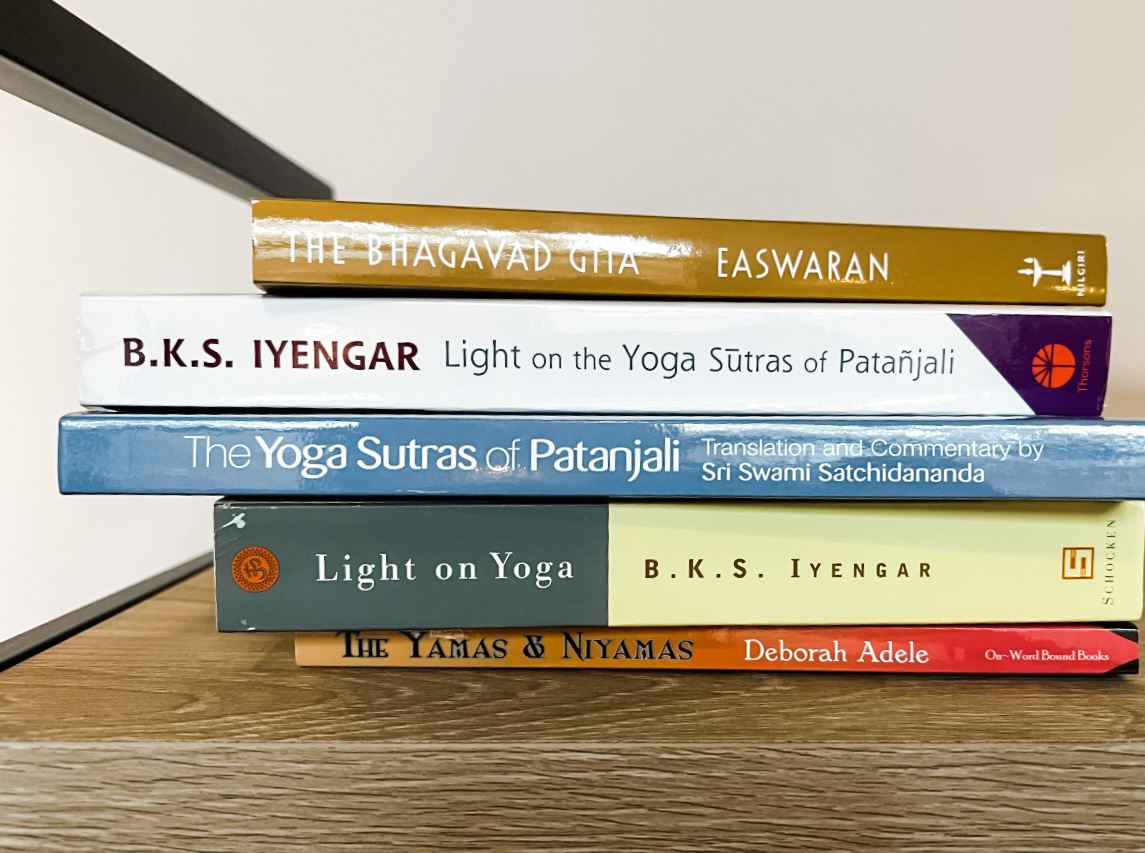 Two main texts that I have felt called to are The Yoga Sutras of Patanjali and The Bhagavad Gita. The Yoga Sutras of Patanjali is a text that outlines a way for us as human beings to live this life in as little pain and suffering as possible. The Bhagavad Gita is a text that teaches us how to fulfill our duties and responsibilities while simultaneously having a spiritual life. Both texts are pretty common to come across during a yoga teacher training or during your search for deeper yoga studies. Both texts also have a lot of different translations, variations, and commentaries from various authors and it can be really overwhelming to sort out which one to dive into!

When it comes to The Yoga Sutras of Patanjali, it’s important to remember that the teachings in the text are quite difficult to follow if you have a family, a job, or any responsibility at all. Some of the practices are really only doable if you live in the middle of the woods and have totally renounced this material world and all your things in it. The studies and the teachings focus mostly on how you have the ability to see the truth and control where your mind goes, but the text also touches on some wild things like superpowers and abilities that you may gain from perfecting certain practices.

The Bhagavad Gita begins with its main character, Arjuna, trying to figure out how to do his duty while also staying connected to his faith and his beliefs. He initially wants to run from his duty and renounce everything so he doesn’t have to deal with it, but he’s told by his best friend Krishna that if he attempts to do that, his mind will get in the way. As someone who has a purpose in this world, Arjuna can’t move through the steps outlined in the Yoga Sutras. In many ways, he’s like anyone with a job and a duty who’s trying to do the right thing.

There are lots of versions of each text, but some of my favorite ones are:

Bhagavad Gita: Talks Between The Soul and God by Ranchor Prime 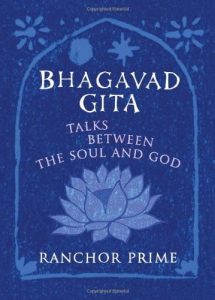 This book is not only a great introduction to The Bhagavad Gita, but also a great study guide. It’s the version that I come back to regularly whenever I want to dive back into certain themes or if I’m looking for inspiration for my teaching. Prime presents a great commentary and lens into The Gita for those of you who are seekers, spiritually curious, and wanting to dig deeper into why you’re here and what this life is all about. It gives some beautiful insight on linking faith with purpose and moving through this world in a conscious way.

A link to purchase: Bhagavad Gita: Talks Between The Soul and God

The Bhagavad Gita As It Is by A. C. Bhaktivedanta Swami Prabhupada

This is a translation and commentary of the Bhagavad Gita by A. C. Bhaktivedanta Swami Prabhupada, founder of the International Society for Krishna Consciousness. This is the longest version I’ve ever read because Prabhupada provides direct translation from Sanskrit to English and then gives incredibly in-depth descriptions on the verses. This version can be a bit deep for someone just reading The Gita for the first time, so it’s not really an easy read to take with you to the beach or the park. This is definitely a text to study and come back to on a regular basis and it also helps to have a teacher guide you through it. This version is at the very heart of Bhakti Yoga, so it’s very special to Bhakti Yogis and students of Bhakti.

A link to purchase: The Bhagavad Gita As It Is

The Yoga Sutras of Patanjali by Edwin Bryant

Edwin Bryan’s text is one of the biggest and deepest ones I’ve ever come across because he is incredibly knowledgeable and not only sources many commentaries from lots of other texts, but also brings in his wisdom and background in Bhakti Yoga. There are many times that The Bhagavad Gita is tied into certain sutras and the text just gets more clear the more you study it. This is definitely a more scholarly version of The Yoga Sutras, so expect to go deep and return to this text again and again.

A link to purchase: The Yoga Sutras of Patanjali

Light on The Yoga Sutras by B.K.S. Iyengar 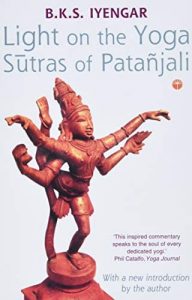 I was drawn to this book because I personally came into the yoga practice through the physical asana practice and B.K.S. Iyengar was a source I felt comfortable with. This is one of the most accessible texts on The Yoga Sutras because of its overall language, word choices, and excellent breakdown of deep concepts. Iyengar outlines some of the sutras almost as clearly as he dissects certain asanas and this guide into the human mind goes hand in hand with the asana practice so well.

As a student of yoga, I have read and studied so many different translations and so many texts on The Bhagavad Gita and The Yoga Sutras. I’ve also taken lots of classes and spent time with great teachers who have unpacked the concepts within the texts in so many different ways. It’s important to keep coming back to these teachings, to seek out teachers, and to have an open mind. We live in a world where people want to fight about everything and anything and I believe that these texts aren’t here to cause arguments. They’re meant to open your mind and your heart and present ways to be a better human being during this lifetime.

Mindful discussions are important, and so is staying connected to the heart. Both of these texts teach that our true nature is to love and we are happiest and most blissful when we connect to that nature. Studying both The Yoga Sutras of Patanjali and The Bhagavad Gita have made me a much more understanding person, friend, family member, teacher, and student and I hope they do the same for you!

A link to purchase: Light on The Yoga Sutras by B.K.S. Iyengar